According to the German Social Accident insurance (DGUV), 30% of the 781,050 workplace accidents reported in 2016 were due to movement. Manual transport was the fourth most common cause at around 10%. In addition to a load being carried by a person, this also includes transporting an object vertically and horizontally. Depending on its speed, a trolley in motion can quickly become a dangerous projectile. Blickle divides the hazards which can be encountered in an intralogistics setting into three different categories, based around the different states of a transport unit: moving, braking and standstill. The wheel and castor specialist increases workplace safety in all of these situations.

Even moving a trolley involves a number of dangers. Castors with a foot guard provide protection against injuries caused by wheels or objects which are thrown up into the air. Blickle customers can use these options for a wide range of swivel and fixed castor series. “All of our transport systems use castors with foot guards as standard,” says Peter Beele, Product Manager at Marl-based LKE, one of the leading manufacturers of transport units and systems, and a long-standing Blickle customer. “Occupational safety is extremely important in an intralogistics setting. Our customers expect us to take the safety of their employees seriously.” 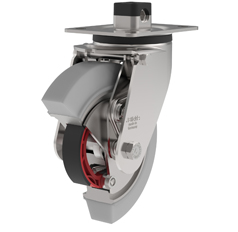 In order to avoid accidents, it is also important for trolley operators to remain in control at all times while the trolley is in motion. In contrast to traditional brake systems, Blickle’s drum braked castors can reduce the speed of a trolley while it is in motion. Blickle also provides a wide range of swivel and fixed castors with a dead man's function to further increase safety. The dead man’s brake has a braking force of over 600 N. Brakes are applied in the starting position and are only released when actively operated. Electric drive systems use an electromechanical dead man’s brake for the Blickle ErgoMove series. The automatic brake system uses a hand detection sensor on the operating handles to ensure that the trolley can only be moved when the operator has both hands on the trolley. The trolley brakes when any of the handles are released. The emergency stop and anti-trap function prevent pressing and crushing injuries and complies with the most demanding safety standards.

Blickle also focuses on ensuring that loads are safe when they are at a standstill. This is done using the wide range of Blickle brake systems. These brake systems are either integrated directly into the castors as a wheel and swivel head brake or installed on the trolley as an independent unit, such as a truck lock. While similar to a traditional jack, they take the load off a transport unit without raising it up. Activating the truck lock creates a surface contact pressure of around 600 N between the trolley and the surface. This ensures that even heavy loads can be kept stable.
Brake forces remain stable regardless of the actual load. Blickle’s wide range of levelling castors is tailored to the increasing demand for mobility from its customers. The levelling castors are units which allow equipment, transport units and machinery to be positioned, levelled, moved and raised up in a flexible way. Both truck locks and levelling castors provide safety and stability on smooth slippery surfaces.

Blickle focuses on safety during the development process for its wheels and castors. Designers use the finite element method to simulate how the final product will behave in a variety of conditions. This allows them to optimise the product for its intended use from the very earliest stages of the development process. Simulated load capacities are then put to the test using special procedures in the company’s laboratory. “It’s important that our products not only meet DIN standards, but are also safe and capable of handling heavy loads,” reports Timo Sieber, Product Manager at Blickle. “That’s why we developed our own test procedures for exposing our castors to extreme conditions. This allows us to push speeds, test loads and the number of threshold passes beyond the standard test requirements. It also gives our customers confidence that the castors remain safe to use in extreme conditions.” The main DIN standards for testing wheels and castors are DIN EN 12527 to 12533.

Blickle provides an electrically conductive version of almost every wheel and castor in its catalogue in order to provide protection against electrostatic discharge. These protect transport unit operators against painful electrostatic discharge and prevent damage to sensitive electronic goods. This also helps manufacturers of electrical and mechanical equipment to meet the European ATEX guidelines.
Para cima